I finally finished a workable German translation of the "Stele of Jeu" (PGM V, 96-172) for personal use based on the German 1928 Preisendanz translation (1) of the Greek Magical Papyri and his monograph Akephalos - The Headless God (2).

The ritual requires a formula of "6 names" to be written on a parchment and read out aloud facing north. But it surprised me a bit to find no mention of the actual words in the text.

According to common practical formulations of the ritual throughout the last century, the following voces magicae are supposed to be used:

There is no doubt that this has worked quite well for operating magi - from the Victorians (Goodwin, Mathers, Crowley) to today's Chaos Magicians (e.g. Gordon White). But in the original "Stele of Jeu" there is no mention that the above words are "the formula" to be used. Those six words are merely the only row of six subsequent powerful magical names to be found in the "Stele of Jeu" text.

(Btw, someone on /r/occult had an interesting dissection of this 6 word name.)

But...the English translation has a typo. It's supposed to be ABAOTH and not ABRAOTH as commonly used. And if you'd want to be persnickety like Preisendanz, who translated the Aramaic word BASYM (usually written BASEM from Hebrew ba-shem) to "in the name of", it would only leave 5 names, wouldn't it? According to the work "Abrasax" by Reinhold Merkelbach and Maria Totti (5) from 1991 which includes a commented number of spells of the PGM, including the Stele of Jeu, the name AOTH definetly, but probably also ABAOTH are shorter forms of SABAOTH. Keeping all that in mind this series of "barbarous names" basically means:

Interestingly in Betz' "Greek Magical Papyri in Translation" (3) you can find a footnote about the missing formula:

"The term ὄνομα apparently refers to a formula containing a number of magical words".

At this point of my research I had the idea that maybe the author referred to something so obvious and well known to him- or herself and other Magi, that simply mentioning "the 6 names" would be enough information for the reader to know what he or she was referring to. What supports this idea is the fact that throughout the PGM, some voces magicae that are commonly used are just noted down in their abbreviated form, e.g. "ABERAMEN (formula)" in PGM IV, 182 actually means to use the palindrome:

But what could be the well known "six names"? The most famous magical hexagrammata of the time that can be found on talismans and in other protective magical contexts in dozens of places between Egypt and Sicily are the "Ephesia Grammata", also called "Orphic formula" although not "Orphic" - maybe an insider Magi joke? The latter description can even be found in PGM VII, 452:

But if you cause [the plate] to be buried or [sunk in] river or land or sea or stream or coffin or in a well, write the Orphic formula, saying, "ASKEI KAI TASKEI" and, taking a black thread, make 365 knots, ...

The six names of the "Ephesia Grammata" referred to are:

A well known and very powerful spell! It does probably not hurt to use this one during the "Headless Rite" instead of the above discussed quite random pick of six magical names. Also check out the awesome paper The Ephesia Grammata: Logos Orphaikos or Apolline Alexima pharmaka? by Radcliffe G. Edmonds III. and this great post over at the Hekate Covenant on a different verison of the Ephesa Grammata that is being used in the PGM.

But it is not the end of this story...

The German Preisendanz translation from 1928 (1) has a very interesting footnote regarding the "6 names". Apparently, the original papyrus contains an annotation about the missing formula. Betz had hinted at this but omitted any further detail. The Preisendanz footnote says:

"On the upper edge of the column is written the (damaged) name ...AIE AIÔI EYIAE AEI ÔÔE AIEOYEYÔ... [and that] the formula is 49 letters long and has a value of 9999 ... reference to a different spell about resurrection of a scarab that has the same name with 49 letters."

(damaged note on the edge of the London Papyrus 46 aka. PGM V)

I also asked my Australian/Greek friend Spiro to take a look at it and he confirms that the annotation reads:

The spells concerning a scarab I could find in the same papyrus was PGM V 213-303 which is neither about a resurrection of the beetle, nor does it have any voces magicae in it. Another one about a scarab is PGM VII, 505-28 has the 48 letters long magical name "AÔ SATHREN ABRASAX IAÔAI AEÔ ÊÔA ÔAÊ IAO IÊO EY AÊ EY IE IAÔAI" in it, and it is also not about resurrecting the bug. The only spell about actually reviving a scarab in the PGM is number IV, 475-829 but it only contains very short barbarous names.

But eventually I found something:

PGM II. 64-183 has a little drawing of a scarab on the bottom of it. The ritual described is an "alternative procedure" on a conjuration of Apollon-Helios for wisdom and blessing. Especially when you look at the original papyrus (Berlin P. 5026) you will find it in the third column on the bottom - and guess what image is drawn right next to this column? A HEADLESS figure! The same one that Jake Stratton-Kent used on his little "Headless One" chapbook. 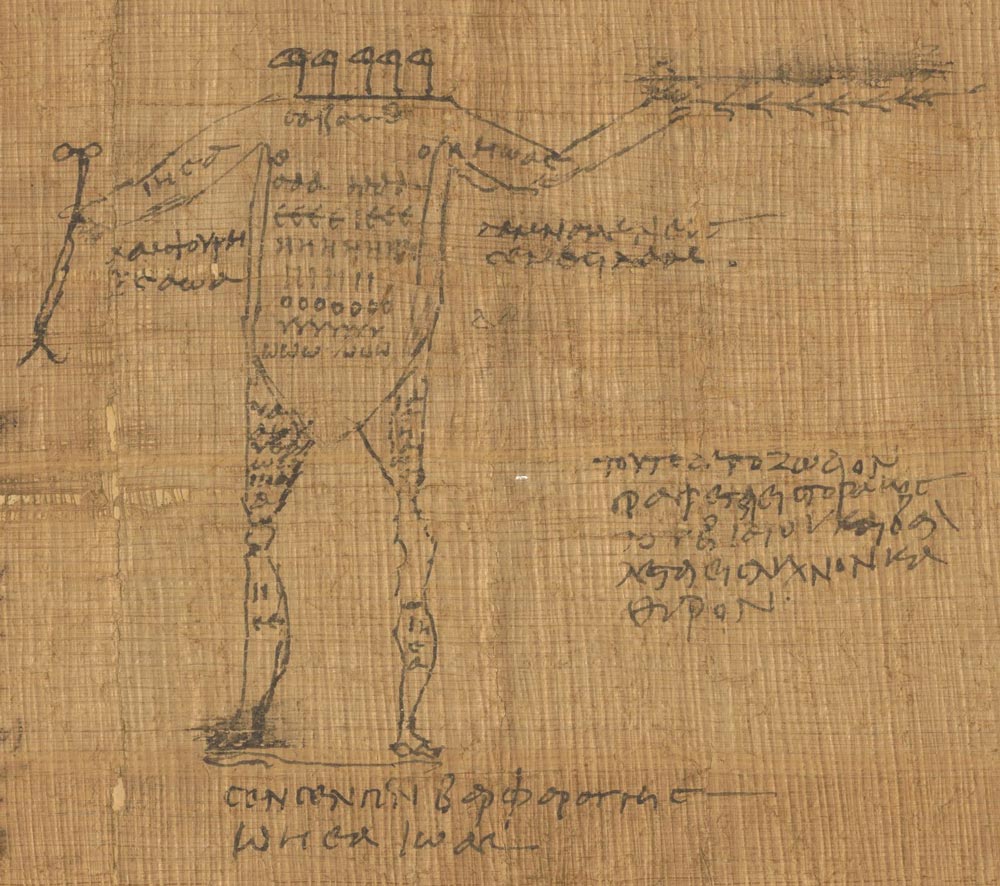 In the middle of the column paragraph above the scarab (PGM II. 127) it is written:

Sounds familiar? Of course it does! Vowels! Is this the formula the author was referring to in the scribbled note regarding the scarab? Perhaps the annotation in the "Stele of Jeu" text was done hastily. The author might have remembered that the name to be used was "on that scarab whatever page," that it enumerates to 9,999 and consists of something along the line of "...AIE AIÔI EYIAE AEI ÔÔE AIEOYEYO...". OK, but it's longer than 49 letters, innit? Yes. But it is made up of the seven magical vowels, the source of everything, from the seven planets to the seven cardinal directions, and seven times seven equals 49. If you take a close look to the headless figure on the right side, he has each vowel written on his chest seven times.

It's worth noting that the vowels are referred to as names ("shudderful names") in PGM V. 81, which directly precedes the Stele of Jeu in Betz. This is just a long shot, but maybe the scribe refers to them as "6" since - in PGM V. 28, the scribe explains that O and Omega are pronounced "in the same way". (Assuming he is referring to tone, not delivery).

I took the Greek letters from Preisendanz transcript of the papyri, and threw them into an isopsephy (Greek gematria) calculator.

(Assuming the transcript is correct) the formula that the scribe claims to add up to 9,999

Then I stumbled over the solution by coincidence in Kieren Barry's "Greek Qabalah" (4) when I wanted to double check if I had the correct isopsephy values. 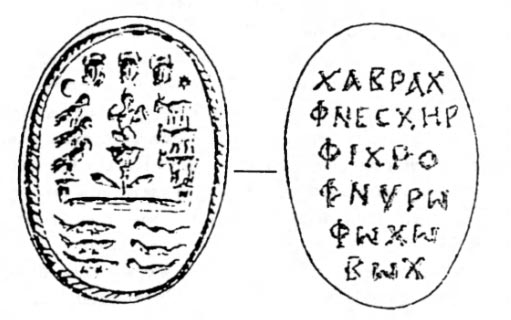 A talisman which shows on the obverse Harpocrates (Horus) seated on a lotus flower surrounded by triads of adoring animals; the reverse has the formula

A magical formula apparently known as "The Great Name" which gematrically adds up to 9,999!

And it was there all the time!

In the Greek original it is misspelled and the whitespace is off, so it actually doesn't add to 9,999 but 8,139

According to footnote 39 the editor of the Betz edition also falsely "fixed" it:

Anyways, the magical six words that add up to 9,999 that the scribe hastily (or purposely) misspelled are usually written like this:

and how many names does that add up to? SIX!!! BINGO!

Now, what about the vowels from the annotation? In Merkelbach/Totti's "Abrasax" (5) the authors offer a slightly different translation of the annotation:

On the upper edge an annotation; First a series of vowels, then: These are (in total) 49 letters; the sum of the calculation is 9999.

No mention of a scarab here. According to the authors, it's the series of 49 vowels that are supposed to add up to 9,999.

I spent over an hour trying to "Jurassic-Park-Frog-DNA" (verb coined by Gordon White) the missing 10 vowels into the ones we already have - and I failed! It was just impossible to create an isopsephy value of 1,708 with just 10 vowels and possible values of 1, 5, 8, 10, 70, 400, 800 without deleting any of the letters that we already have. Aaarrgh!

So I looked back at the original papyrus and deciphered the handwritten letters myself. I noticed that the first Ypsilon (in ÊYIAÊ) seems to have been actually quite a guess by Preisendanz. More than half of the letter is ripped off at the top. It could also be another letter that the scribe does not necessarily write in the full line height, for example a miniscule Ômega. So I tried again with ÊÔIAÊ in the series of vowels instead of ÊYIAÊ:

After a while of Frog-DNA'ing I got it!

I eventually succeeded! Here is the Frog-DNA'ed vowel series of the annotation:

and they could have potentially been in the papyrus annotation as well:

Have a play yourself! In case you end up with a better vowel combination, feel free to share it!

To conclude: unfortunately the "London Papyrus 46" with the annotation is torn on the edge, so we will never know what its full content was but the reference to the scarab papyrus seems to make some sense. In my opinion it makes more sense than simply using the classic "AÔTH ABAÔTH BASYM ISAK SABAÔTH IAÔ" formula.

So, why not use the magically resurrected 49 vowels of the annotation in addition with the referenced "most great name" that both enumerate to 9,999 - as noted by the scribe:

I guess the only solution to the missing formula is the magic solution: take it, experiment, and see where it will take you.