This is a half a year late quick report of personal gnosis that followed my initiation into the sphere of Mars right before he went retrograde in August 2020. I learned about the art of war, energy management, and to follow my instincts.

I admit it wasn't the best Astrological election to do my initiation into the sphere of Mars on Tuesday, August 18th. Mars was squaring Saturn, but also in a trine with a combust Mercury. But it was a New Moon and Aries was rising during the hour of Mars. I followed my intuition and just did it. My tropical sun-sign is Aries, so is my sidereal ascendant as well as my Lot of Daemon. So far, martian space weather has been mostly auspicious in my life.

I got myself into the right mood by listening to some war-glorifying electronic anthems from the local anti-german subculture, like "Alles musz in Flammen stehen" ("Everything must be in flames") by Das Flug, or Björn Peng's "We Do" and the theme of one of my favourite post-apocalyptic b-movies "Hardware". As soundtrack for the initiation itself I chose an organ arrangement of Gustav Holst's "Mars. Bringer of War".

My libation of choice was a deep port wine and I was excited to fumigate some of the Canarian dragonblood I had harvested on Tenerife some years ago. I decorated the altar with my taiji practice broadsword and a selection of corresponding Tarot cards: Ace of Wands, The Chariot, The Tower, ...The Force? I hesitated with the latter because it represents a more feminine yin form of martian energy but it made me think of Athena, the sister of Ares, symbolizing a more disciplined, strategic side of war. I wasn't sure about it, so I put it back into the card box.

Utilizing my Psithemius table of practice the invocation of Samael went smoothly. Like in my first use of the device for my solar initiation I got visual feedback again this time: the silhouette of a staff or spear wielding man appeared in front of my inner eye while gazing into the crystal. 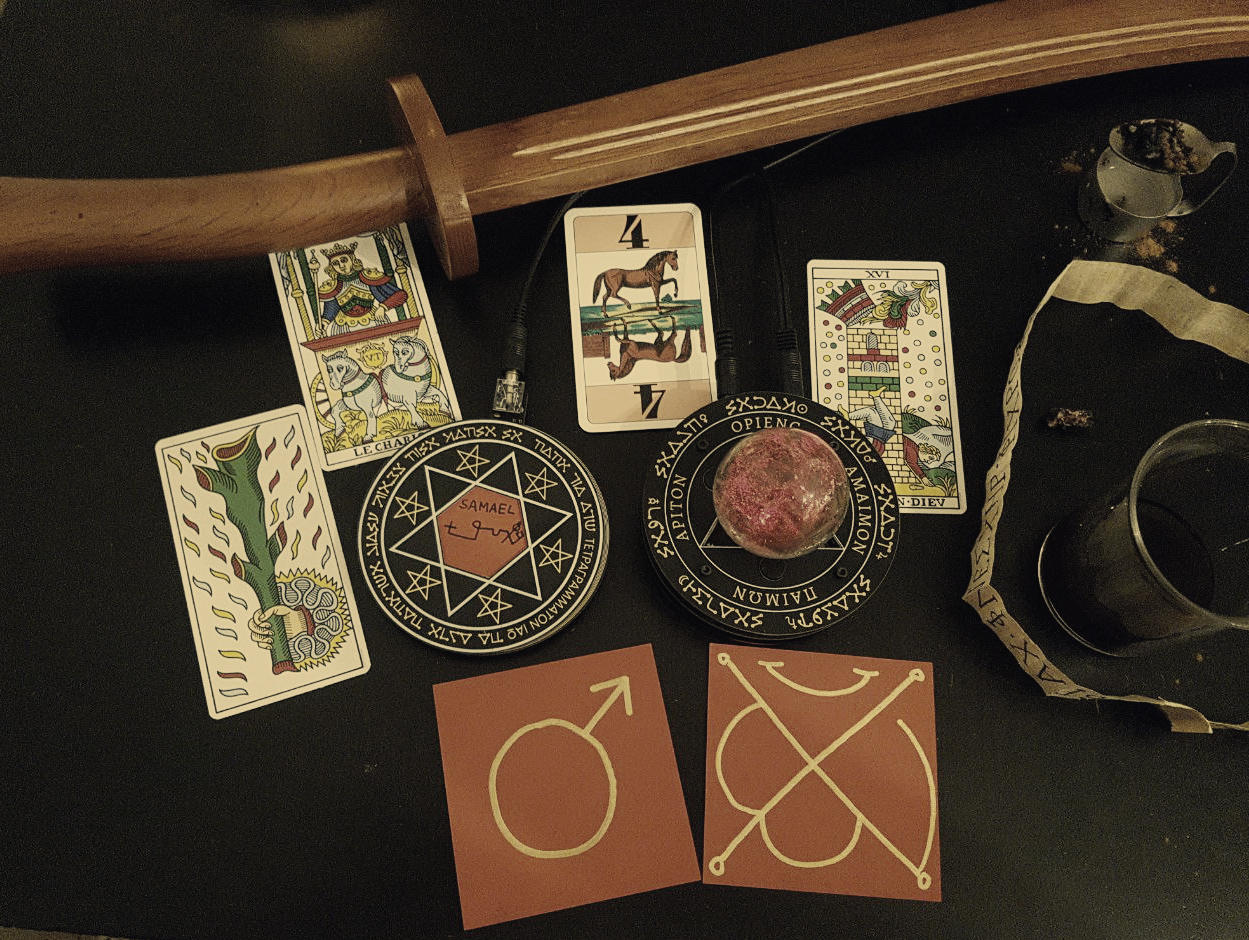 I did not expect to have instant effects from the ritual, but already from the next day I had a burst of energy that lasted for a good week. I followed an urge to clear out our basement, a project I had successfully postponed over and over for months already. I also finally felt very motivated to start working on renovating our newly purchased transporter to turn it into a campervan. I worked on it almost every day.

A few days later things got weird. At 5 in the morning I was woken up by an obnoxious digital sounding noise. It came from my phone that was charging in the kitchen. It was an alarm. But the phone showed no indicator, no snooze button, no sign of the usual alarm interface. It stopped when I hit the volume down button. Then I saw that the phone was actually set to fully silent - even the alarms. It shouldn't have made any sound. Weird! When I went back to bed, slightly confused and annoyed, my daughter E suddenly started to giggle and cackle in her sleep. It creeped the hell out of me. Later that day I was sitting on the couch in our living room and opened a letter from the Police. Allegedly I had bumped into someone's car while pulling out of a parking lot. I was devastated and scared of the legal consequences. Suddenly my daughter came to me with a proud face to show me something she had done. I almost fell off the couch...

She handed me the Force card of my tarot deck, cleanly cut into two halves and the rounded corners clipped off. I should have known better but instead I yelled at her and she started crying. Of course she didn't know or understand what she had done. I was confused. I clearly remember having put this card back into its box. How did she get it? And how come it was the exact one I had so hesitated with? It struck me like an answer: "No, not this card is not Mars!" 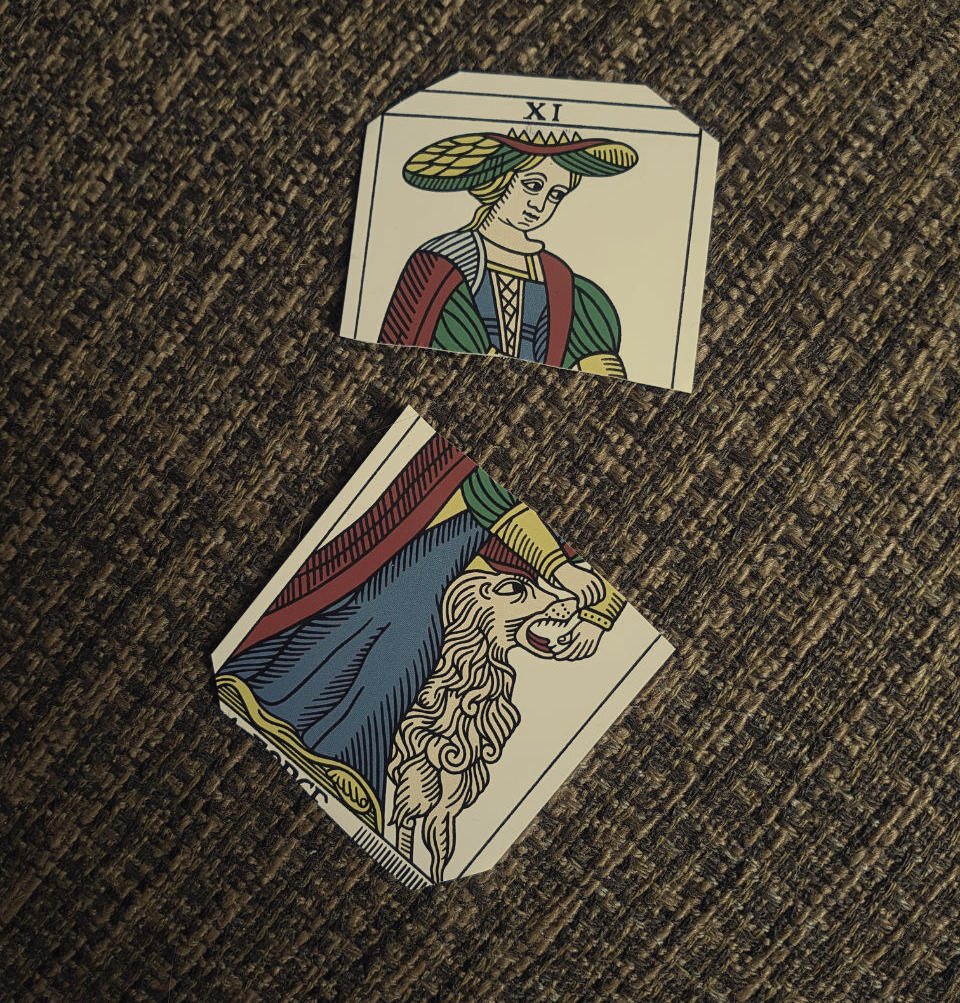 And in combination with the letter from the Police! Samael clearly teaching some lessons here. I guessed this was about obedience, honoring rules and questioning my relationship with authorities. Things I have always had difficulties with.

The Art of War

The core martian teachings unfolded in the following weeks. But due to privacy concerns regarding a client I work as a consultant for I cannot go into any of the juicy details. All I can vaguely disclose is they had experienced an internal breach of trust that resulted in a power struggle destabilizing the whole company. Suddenly and out of nowhere my technical expertise was needed, but in more ways than anticipated. I found myself placed in the role of a war-general: assuming and predicting the next steps of the enemy and working on strategies to anticipate them.

My bursts of energy of the first week after the rite had been focused on my own personal projects, random and not very controled. Now I learned that directing martian energies towards a greater goal beyond mere personal gain and satisfaction seems to exponentially amplify them. My martial personality traits bloomed as never before and I felt contented to a whole new level.

This chapter lasted almost the whole Mars retrograde phase but ended in a glorious victory. The internal enemy was defeated, their actions repelled and retaliated. I was high from pride, the client both as surprised by my skills as I was and very satisfied by my work. Soon after, we agreed on a long term commitment. I felt very lucky, because the pandemic had killed my 15 year career from one day to another and I really needed a new job anyway.

The other "thing" that happened in the aftermath of my Mars initiation was more of a process than an event. It started out as just a subtle but then day after day increasing irrational feeling of panic and looming danger. I got very anxious about it but at the same time it also felt eerily familiar.

In the the last decade I have already learned to trust my general instincts and gut feelings about life decisions more than my rational faculties. Ever since treading an enchanted path I tend to attribute this subtle "knowing" to my "higher self", "daimon", or my "guardian angel". When I found out that the planetary ruler of my astrological lot of daimon (Aries) is Mars I wasn't surprised at all. This intuitive force has always felt that way to me.

The growing anxiety felt exactly like that. Almost animal-like. An ovine precognition of imminent danger. And it was clearly related to the pandemic. Day after day I felt a stronger urge that we must escape Berlin as fast as possible, or else... 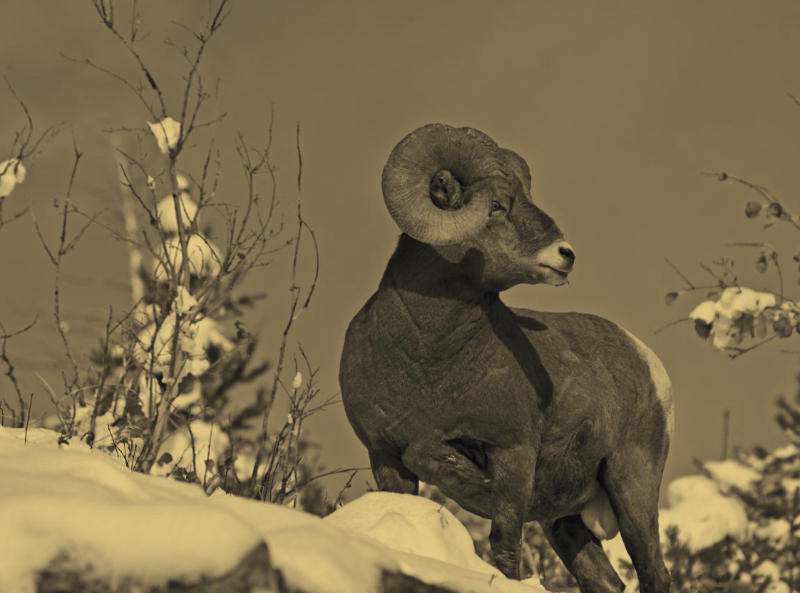 I talked to my wife about it and she trusted me. We came up with a crazy plan. Our initial incentive to buy a van and convert it into a camper was to travel France, Spain, and Portugal. We even did a test camping trip through the South of Germany in July and really loved it. Well, then pandemic related travel restrictions were put in place, so we had to ditch that whole idea. Now it was back on the table, but modified. Not "travel" but "escape".

At this point we didn't really know what to escape from but we knew where to: The Canary Islands.

That in itself seemed quite crazy: drive to an archipelago off the coast of Morocco, almost 4000km away, by car?! Mars didn't think it was crazy, so that's what we ended up doing...but that's going to be the content of another article.

The police sent a letter a few weeks later that the case was dropped. And eventually also my intuition was right. After we left Berlin, lockdown measures got implemented, all childcare and schools closed. Most flights cancelled. Travel restricted. We would have been stuck in a locked down metropolis during a cold and dark winter with a bored and anxious child without kindergarten to go to and without friends to meet. Thanks to Mars we avoided a mental health crisis.