Second of a series of articles about my careful attempt to recreate a generic framework of Helleno-Kemetic magic. For an introduction and overview check out this article

Despite widespread claims that the circle of protection - a fundamental element of post-medieval Western Magic - has its origins in ancient Kemet, there is not really much evidence for it. In "Techniques of Graeco-Egyptian Magic" Dr. Stephen Skinner hypothesized that the earliest form of the circle in ancient Kemet may have been inscribed upon the ground in the form of the ouroboros, the snake biting its own tail. To be honest, this claim seems nothing more than a poke in the dark. Instead, the roots of drawn protective circles are more likely to be found in ancient Mesopotamia (Zisurrû).

The sages of Kemet did not draw circles on the temple floors, but used the practice of ceremonial circumambulation for all kinds of purposes throughout the millennia. The Kemetic word pẖr means encircling but also enchanting or controlling.

Comparable rituals of circumambulation comprise both public, cultic ceremonies and private, "magical" ones. In particular, the royal coronation ritual included such a "procession about the desert" and a "circumambulation of the walls" to delimit the "sacred space" of the kingdom, [...] Cultic encirclement appears as well in the Ptolemaic ritual of "Protecting the House" of the sacred falcon venerated in Edfu, involving the surrounding of the temple by torches and the "bedchamber" of the god by tamarisk twigs. Nuances of encircling are elaborated within the accompanying recitation to include allusions to the coronation "encirclement as boundary," to the ouroboros "encirclement as protection," and to the simple "going around" as an enactment of free, unhindered movement. [2]

What the data does show in abundance is the importance of protective phylactery in Helleno-Kemetic magic: wearable charms and amulets to ward off daimōnic influences. These usually involve the inscription of barbarous names of deities, various configurations of vowel sequences or palindromes, as well as magical symbols usually written with a bronze stylus onto hieratic papyrus or precious metals, such as gold, silver, tin, or lead - usually corresponding with the purpose of the phylactery and the daimōnes involved.

When creating papyrus phylacteries, I like to experiment. I fold them into little objects, enclose them in containers, even considered baking them into clay. One of my favourite protective amulets that has served me well is the hundred-lettered name of god (see below) inscribed onto a strip of tin foil, sprinkled with holy water, rolled up and stuck into a tiny glass bottle together with some Mugwort flowers. 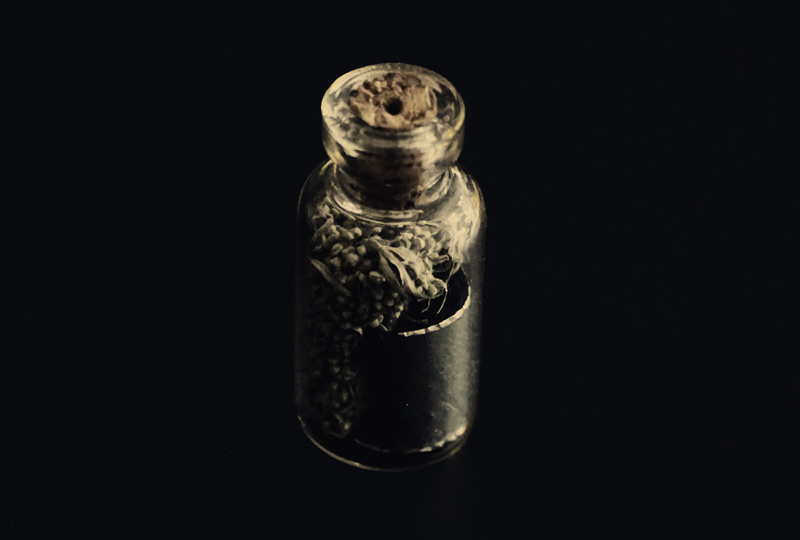 Here is a selection of a few phylacteries that work well for the general purpose of protection:

The Greatest Name of God

I am he who has presented myself to you, and you have given me as a gift the knowledge of your most great name, of which the number is 9999 (PGM II. 127f)

There are two "great names" that according to Greek isopsephy add up to the value of 9999. [3] According to philologist Reinhold Merkelbach they were probably "greatest" in a practical mathematical sense: in a system of memorizing and calculating numbers well known throughout the 4th century Roman empire by means of finger counting: Computus digitorum. The three left fingers of the left hand were used for the units, the other two for the decimals. Thumb and index finger of the right hand for the hundreds and the three rightmost fingers for the thousands. So the largest number to be displayed with this method was 9999. [4]

The most commonly known of the two "great names" that is also present on numerous gems and in various misspelled variations in papyri of the Anastasi Handbooks is: 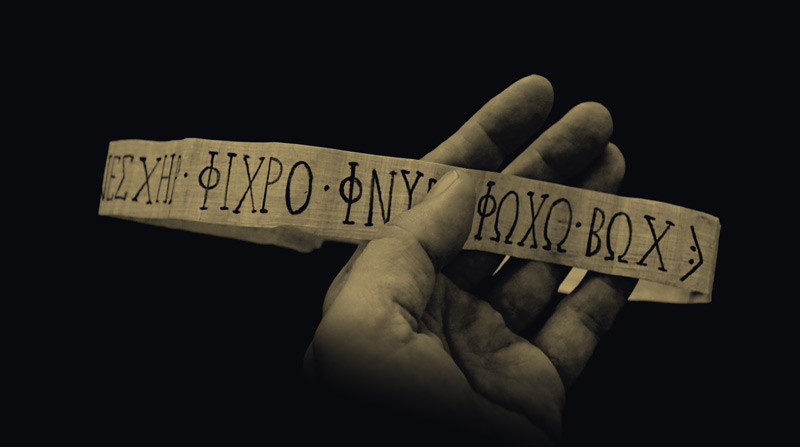 The other one appears in PGM IV. 2430 and is attributed to a sage named Epaphroditus:

Write the formula on a new sheet of pa­pyrus.

The Hundred-Lettered Name of God

Inscribe on a gold leaf:

The Chief Name of Typhon

Onto a silver leaf inscribe this name of 100 letters with a bronze stylus, and wear it strung on a thong from the hide of an ass.

For a detailed discussion on this amulet, check Leonardo Drakon's archived post. 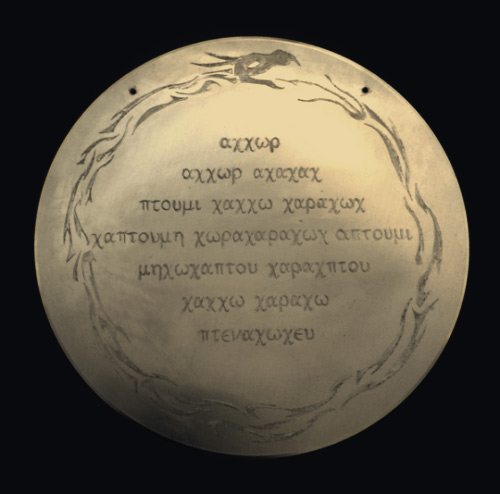 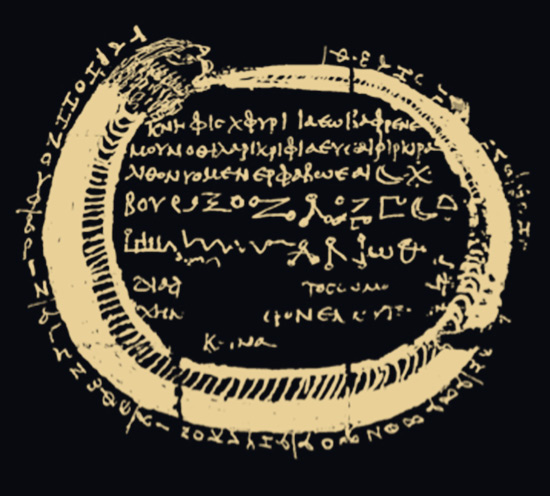 The scribe's artistic skills are questionable, but from the context it becomes clear that his squiggles are supposed to be a lion-headed ouroboros. Also the magical characteres he uses in the text do not match the drawing. According to philologist Raquel Martín Hernández the formula to be written into it is also flawed [5], because he apparently got confused with the two ιαεω bits and messed up the palindrome he intended to write:

The formula to be written around the ouroboros has quite a lot of lacunae and is unfortunately lost. I freehandedly fixed it and it seems to work. It is important though that the words are to be written in a counter-clockwise manner.

Here is my artistic interpretation of the phylactery including the whole palindrome and all characteres and a photo of the latest version I drew on papyrus. It has served me well! Replace the first NN with your name and the second NN with the name of your mother. 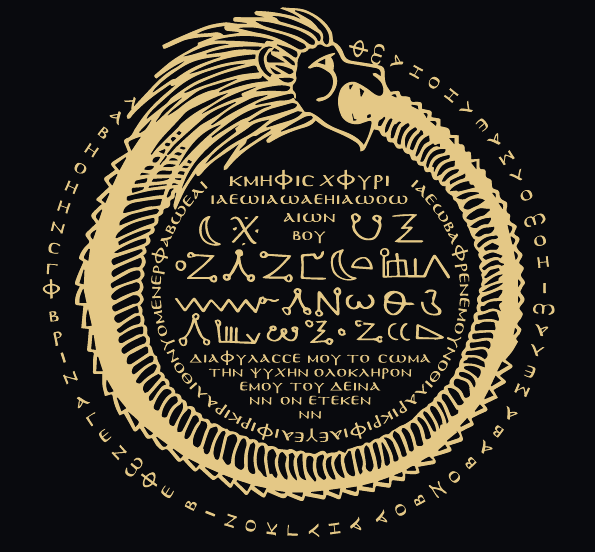 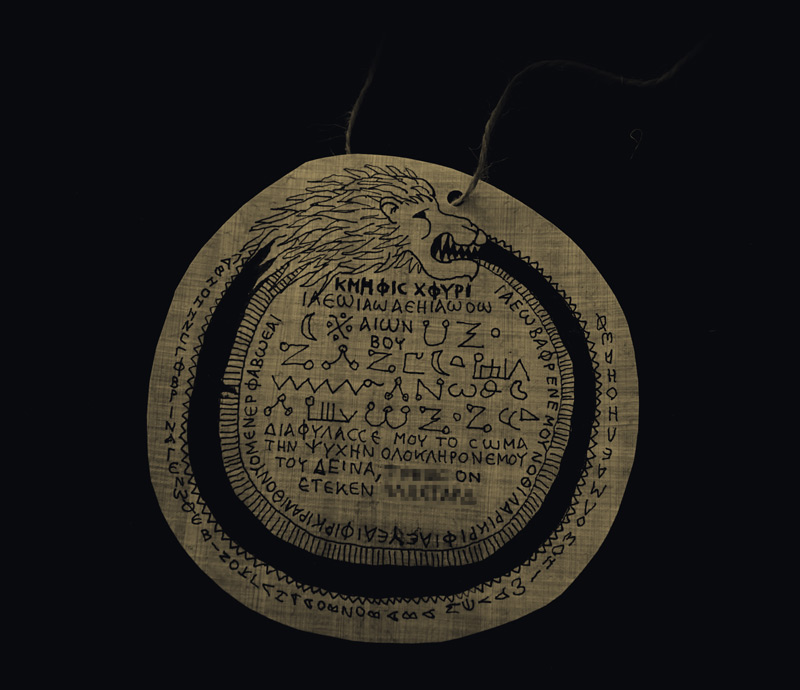 A 6th or 7th century Coptic phylactery that synchronicity threw into my lap has the cryptic name P.CyYBR inv. 1792. For a discussion of the original content of the papyrus, check this great article. 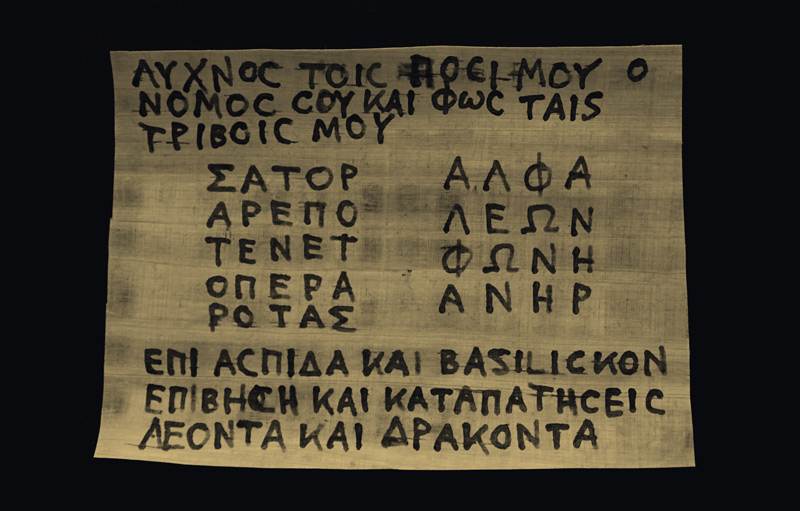 My go-to consecration ritual for all kinds of charms and phylactery is a shortened version of PGM XII. 201-69.

It first calls upon a multitude of fate related gods. The translation of this spell in the Betz anthology [8] is incomplete, Preisendanz interpreted them as the three stations of the sun [6], because of the transcription as ´γ ηλιοι ανοχ μανε βαυχυχ meaning "three suns" and three assumed voces magicae "Anoch, Mane, Baychych" being their magical names. Merkelbach & Totti follow this interpretation [7]. I don't think they are right though.

First of all, the word ανοχ is an often used voce magica and in Coptic means "I am" derived from Egyptian ink, the word μανε could be a Greek transcription from Egyptian mnw mostly meaning "monument" or "image of", and βαυχυχ like the more commonly used βαινχωωωχ equals the Egyptian phrase b3 n kkw or "Ba of Darkness", an epithet of the primordial god. So the whole string of voces magicae could simply mean "I am an image of the Ba of Darkness".

Second, the wording of the invocation of the gods rather suits the Decans than the solar stations. They are called as assistants for the consecration.

In the next step the mage self-identifies as a number of divine Kemetic forces to compell the Decans to help and then calls upon the great god to consecrate the object. 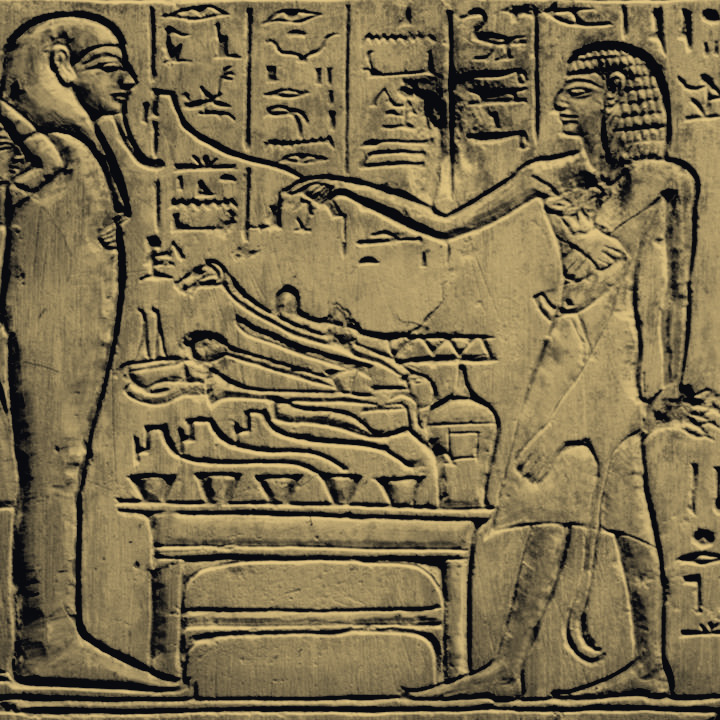 Making a pit in a holy place open to the sky, or if you have none in a clean, sanctified tomb looking toward the east, and making over the pit an altar of wood from fruit trees, [...] burn all sorts of incense. Then, standing by the pit, look to the east and, pouring on a libation of wine, honey, milk, and saffron, and holding over the smoke, while you pray, the [object to be consecrated], say:

I invoke and beseech the consecration
O gods of the heavens,
O gods under the earth,
O gods in the middle place, circling the three suns,
Anoch Mane Baykhukh,
who come forth from the womb day by day.
O masters of all the living and the dead,
O heedful in many necessities of gods and men.
O concealers of things now seen,
O directors of the Nemeseis who spend every hour with you,
O senders of Fate who travels around the whole world,
O commanders of the rulers,
O exalters of the abased,
O revealers of the hidden,
O guides of the winds,
O arousers of the waves,
O bringers of fire,
O creators and benefactors of every race,
O nourishers of every race,
O lords and controllers of kings, come, benevolent, for the purpose which I call you for, as benevolent assistants in this rite for my benefit.

I am a plant named Baïs;
I am an outflow of blood from the tomb of the great One between the palm trees;
I am the Pistis found in men, and am he who declares the holy names, who is always alike, who came forth from the abyss.
I am Sokrates who came forth from the eye of the sun.
I am the god whom no one sees or rashly names.
I am the sacred bird, Phoinix.
I am Krates the holy, called Marmarauōth.
I am Helios who showed forth light.
I am Aphrodite called Typhi.
I am the holy sender of winds.
I am Kronos who showed forth light.
I am Mother of gods, called Heaven.
I am Osiris, called water.
I am Isis, called dew.
I am Ēsenephys, called spring.
I am the image resembling the true images.
I am Souchos who appears as a crocodile.
Therefore, I beseech you, come as my helpers, for I am about to call on the hidden and ineffable name, the forefather of gods, overseer and lord of all.

Come to me, you from the four winds, god, ruler of all, who have breathed spirits into men for life, master of the good things in the world. Hear me, lord, whose hidden name is ineffable. The daimōnes, hearing it, are terrified — the name Barbareich Arsemphemphrōth — and from hearing it the sun, the earth, roll over; Hades, hearing it, is shaken; rivers, sea, lakes, springs, hearing it, are frozen; rocks, hearing it, are split. Heaven is your head; ether, body; earth, feet; and the water around you, ocean, O Agathos Daimōn. You are lord, the begetter and nourisher and increaser of all. [...]

By your power the elements exist and all things come into being, the route of sun and moon, of night and dawn—all things in air and earth and water and the breath of fire. Yours is the eternal processional way of heaven, in which your seven-lettered name is established for the harmony of the seven sounds of the planets which utter their voices according to the 28 forms of the moon. Yours are the beneficent effluxes of the stars, daimōnes and fortunes and fates. [...] Hear me and complete for me this operation so that I may wear this power in every place, in every time, without being smitten or afflicted, so as to be preserved intact from every danger while I wear this power. Yea, lord, for to you, the god in heaven, all things are subject, and none of the daimōnes or spirits will oppose me because I have called on your great name for the consecration.

And again I call upon you,
according to Egyptians, Phnōeai Iabōk;
according to Jews, Adōnaie Sabaōth;
according to Greeks, Pantōn Mōnarchos Basileus;
according to the high priests, "hidden, invisible, overseer of all";
according to Parthians, Ouertō, master of all.
Consecrate and empower this object for me, for the entire and glorious time of my life.

(based on the PGM XII. 201-69 translation by Morton Smith [8] edited with information found in [7] and [9] and consultations with Λαζαρίδης from the foot of mount Olympos)