Ever since he knocked on my door I have wanted to integrate Horus more into my ritual practice than the adorations he already receives on an irregular basis. I am currently involved in a year long exploration of the Egyptian Decans (not the Rune Soup Decan Walk), specifically in their final Egyptian forms during the Ptolemaic era (more details about this will come in a future post). The Decan of a few weeks ago (♓3) was symbolized as Heru-pa-khered / Harpocrates (Horus the Child) in his common depiction as a nude youngster seated on a lotus flower wearing a side-lock and holding a finger to his mouth. 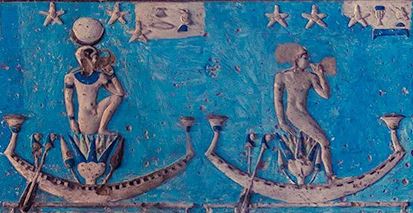 In my research about him I discovered that magical stelae of Horus in this form called "cippi" were erected in public places such as the forecourts of temples. His image is often surmounted by a head of the god Bes, and he is grasping snakes, scorpions, and other dangerous wild animals in his hands to signify his dominance over these symbols of mortal danger. They appear to have been used typically by pouring water over them which was collected at the bottom and drunk for protection and healing. 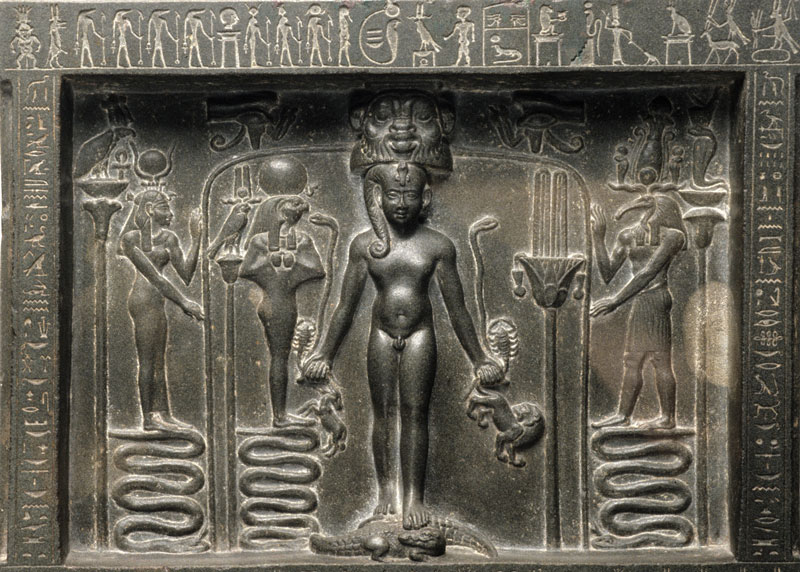 An ancient Egyptian spell to be spoken over such a cippus can be found in Borghout's spell collection (1):

An adoration of Horus, to glorify him, To say on the water and on the land. Words spoken by Thoth, the saviour of this god:
Hail to you. God, son of a god! Hail to you, heir, son of an heir! Hail to you, bull, son of a bull, whom the divine cow bore.
Hail to you, Horuss, who came forth from Osiris, whom the goddess Isis bore. I have spoken in your name, I have recited with your magic, I have spoken with your spells, I have conjured with your conjurations, which your heart has devised — they are your sorcery — which have come forth from your mouth, which your father Geb has entrusted to you, which your mother Nut has given to you, which you have been taught by the Majesty of the Foremost One of Letopolis in order to ensure your protection, to renew your safeguarding, to close the mouth of any reptile which is in heaven, which is in the earth, which is in the water, to keep the people alive, to propitiate the gods, to glorify Re with your hymns.
Come quickly to me on this day like the one did for you who handles the steering oar of the divine bark. May you drive away for me all lions on the desert plateau, all crocodiles in the river, all biting snakes in their holes! May you render them for me like pebbles on the desert hills, like potsherds of a jar along the street. May you exorcize for me the pulsating poison that is in all the limbs of this man who is suffering. Take care not to be negligent when you speak about it!
See, it will come for you when you are coming for it, with your words directed against it. See, your name is involved therein on this day! I have created the awe for you through your magic — and you have grown in prestige through your magic spells — to keep alive those who suffer from an oppressed throat.
Praise is given to you by mankind; righteousness is adored in your appearance. All the gods are invoked in your likeness.
See, your name is invoked on this day: 'I am Horus the Saviour who ensures protection for you'.
(J. F. Borghouts, Ancient Egyptian Magical Texts, Brill - Leiden, 1978, Spell 123)

Having such protective and healing properties, wouldn't Harpocrates be predestined for protective magic such as banishing? Yes! So, let's do it...

The Sphere of Horus

Most of my spellwork is PGM influenced, so naturally I don't do much elaborate ritualized banishing and use mainly phylactery talismans for protection. But since some nasty experiences in my recent past that I attribute to negative spiritual influence, I have become more paranoid about better protection. The LBRP or it's thelemic derivatives don't really feel fitting in my workings.

My favourite banishing rite has always been Jason Miller's excellent “Sphere of Heka” from his poweful book "Protection and Reversal Magic" (2).

Inspired by Harpocrates the Saviour I took the opportunity and modified Jason's ritual to make it even more Greco-Egyptian than it already was. I dubbed it Sphere of Horus.

This version uses Greek instead of Latin and invokes different guardians of the cardinal directions.

Many thanks to my Facebook buddy and fellow mage Lazaridés at the foot of mount Olympos for the invaluable translation work!

Begin by standing and facing east. Imagine that you are at the very center of the universe. Take a deep inhalation and imagine that above you, emanating from the highest heavens descends a column on pure white light. This light enters the crown of your head and passes through you, down into the ground. This white light has the qualities of purification and centering. Exhale and intone the following:

Take another deep inhalation and imagine that a reddish colored light from beneath you rises through the column and passes through you upwards. Whereas the white light was purifying, this light is vitalizing. Exhale and intone the following:

This portion of the rite grounds, centers, purifies, and empowers you so that you are in a proper position to exercise authority over the forces that you wish to banish. The Falcon and the Serpent are universal symbols of chthonic and ouranic forces. By conjuring the column you take in the totality of all that is, above and below. After the column, you invoke the divine by the ancient formula of IAΩ.

Still standing within the column, pronounce to the powers that be:

Make a fist with your left hand and place it against your chest over your heart, cover it with your right hand and apply about five pounds of pressure there and imagine that the force that you summoned forth from the column begins to concentrate at the heart. Imagine that this power, drawn by the physical pressure and force of will, takes the shape of a gray sphere about the size of a baseball. Visualize this until you have it very clear in your mind. Release the pressure, and in one motion step forward with your left foot and throw your arms outward in what is called the Sign of the Enterer. As you make this sign, see the sphere at your heart grow. As it grows and spreads, it pushes back all malefic forces and harmful spirits. It grows past your body and continues until it stops where you wish to make the boundary, forming a wall of grayish astral force. Intone:

Take your wand or knife of the art in your hand, and extend your arm straight out. The tip of the tool (or your finger, when working without tools) should touch the edge of the circle that you want to make. If you have extended the circle past the walls of the room that you are in, then you can simply point towards the edge. Pivot, or walk the edge of your circle and intone the following:

Consider that this sphere is an invisible and impenetrable fortress surrounding you, keeping out all harmful forces and spirits of ill-intent.

The last section of the ritual invokes the four winds as guardians to the four comers of our sphere.

Face East and visualize Henkhisesui standing at the eastern edge of the circle facing the center. The Egyptian east wind, Henkhisesui, sometimes occurs in anthropomorphic shape, and has a ram’s head, but he is occasionally figured as a winged beetle with the head of a ram. Make the gesture of conjuring and invoke:

Face South and visualize Shehbui standing at the southern edge of the circle facing the center. The Egyptian South wind Shehbui, is represented as a man with a lion’s head, and wings. Make the gesture of conjuring and invoke:

Face West and visualize Hutjaiwi standing at the western edge of the circle facing the center. The Egyptian West wind, Hutjaiwi, has a serpent's head on the body of a winged man. Make the gesture of conjuring and invoke:

Face North and visualize Qebui standing at the northern edge of the circle facing the center. The Egyptian North wind was called Qebui, and is pictured as a four-headed ram with wings. Make the gesture of conjuring and invoke:

Face East and imagine all four guardians in their corners protecting the circle. Intone the following:

Of course you may also use the Greek Anemoi wind spirits instead:

Take a single deep breath and bring your hands together in front of your heart is if you are praying. Intone:

I wrote Jason Miller and told him about this variant of his banishing ritual and he loved it and encouraged me to publish it!

I have successfully used the Sphere of Horus to remove potentially harmful spiritual residue after having to apply Gordon's Hoodoo Hex to an obnoxious neighbor. First I wasn't completely sure if it worked but then my cat walked into the room, let himself fall on his side, stretching all paws out and gave me his usual blinky look of total relaxation. I fully trust his judgement! He might be a really bad hunter, but he usually seems to be quite aware of things from the other side.

Here is the Sphere of Horus as a Google document for nicer print layout, also including Jason's original descending dove and Hekate