Last August I went on a business trip together with my friend and colleague J. and in the first evening we were invited to a dinner buffet by our customer where we enjoyed great seafood and white wine.

Back at the studio apartment where we stayed J. went straight to bed but I felt slightly tipsy from the wine and spent another hour playing around with my portable audio synthesizer before going to bed. My small room had just a queen size bed, a small table and a closet and there was this weird little door next to the table that led to a dark and empty but quite large storage space behind the wall. Somehow it made me a bit anxious and I put the table in front of the door and went to sleep.

I had an amazingly vivid dream in the morning. I was chased by a group of Zombies in full American football armour and I was with a friend trying to figure out what to do. There was a barbecue grill and we decided to throw lance sized meat skewers at the attackers. Suddenly my friend transformed into a zombie too and started throwing skewers at me. The football zombies learned from him and also attacked me with the skewers I had thrown at them. At this point my dream became lucid and I was able to stop the time in a Matrix like effect and the skewers stopped in front of me in mid-air.

The scenery changed to a dark solemn room made of stone, kind of like in a medieval castle and in a dramatic light and soundscape I was presented a large iron shield with an emblem on it that was alive and moved. It was a large red serpent ablaze in flames, rising up in a double S shape staring at me with bright red eyes. The only feeling I had at this moment was that this was of incredibly great importance. 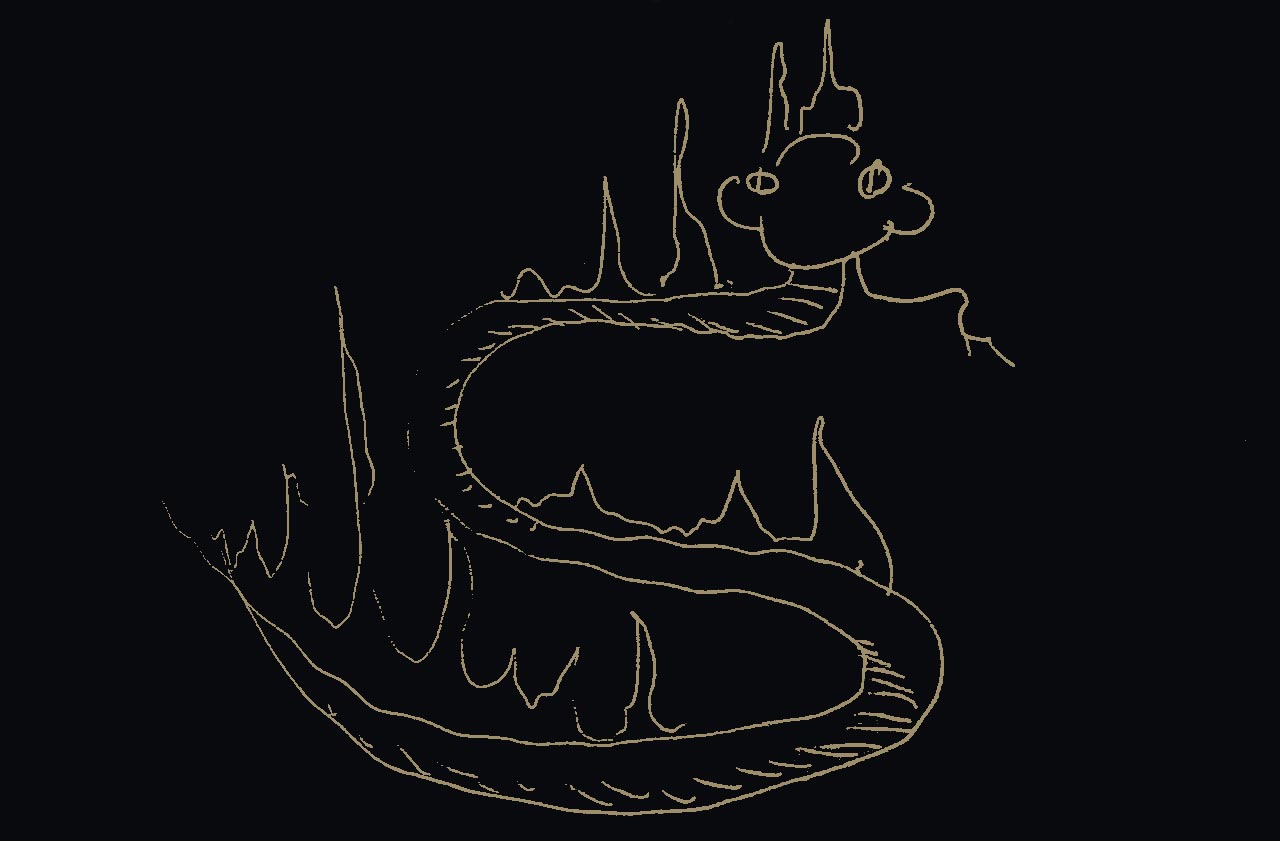 (sketch i drew right after waking up)

Suddenly I was in my hometown on the street and I could see the football zombies again, still far away but heading towards me. There were also three yound midget girls in dresses with creepy faces that came towards me. I freaked out when I realized I no longer had control over this dream and I wanted to wake up.

I jumped up in bed, happy that it had just been a bad dream and while details from it were already rapidly fading from my memory I saw the serpent shield before my inner eye, clear and bright. I got up from bed and stumbled out into the hallway heading towards the bathroom. I walked by J.'s door that was open a crack and I could catch a glimpse of her foot sticking out of her bed. I opened the door to the bathroom and went inside. I locked the door and when I turned back around towards the toilet it was gone.

Instead there was a staircase leading downwards. I was shocked and slowly aproached the stairs that went in a right angle spiralling down in a square like manner. I slowly walked down the steps and it was quite dark. I waited until my eyes adapted to the twilight and I saw a large hallway of some kind of abandoned floor in the building. There were a lot of spiderwebs and everything covered under thick layers of dust and rubble. I saw a stray cat or rat rushing by. Then I noticed a strange movement in the shadow and saw what looked like reflection of light in a pair of dark eyes. I freaked out and realized that nothing of this made any sense and that I was still stuck in a dream. I really wanted to wake up.

I opened my eyes and I was still lying in bed. But I couldn't move. I was completely paralyzed. Panic. I could see myself lie in bed unable to move.

But I was still down there on this creepy staircase in the dark and the eyes were gone. Shit. Panic. I ran upstairs back to the light into the bathroom. I jumped through the hallway into my bedroom.

I woke up so quickly I almost fell out of bed. My heart was racing. Am I awake? I was able to move normally. I sat on the edge of my bed trying to make any sense of what had just happened and I was very thirsty. I got up and went out into the hallway heading towards the bathroom. I walked by J.'s door that was open a crack and I could catch a glimpse of her foot sticking out of her bed. Oh my god I thought. Total déjà-vu. I opened the door to the bathroom and everything seemed normal. I sat down on the toilet and drank a lot of water from the tap and when I closed ny eyes I could see the shield with the fiery serpent seal.

there was wine involved and the strange small door and the liminal space behind probably influenced my dream. Our apartment was across two floors with steep stairs leading from the kitchen and livingroom up to another floor with bath and bedrooms. Also I think I remember I saw a dead lizard or snake on the side of the road the day before. That doesn't explain why the serpent in my dream was burning though and why it was so out of context of the rest of my dream. But it was a dream, so I guess anything is possible. But the sleep paralysis and dream in a dream with out of body sensation couln't have been just from the wine. Otherwise I definetly would want to buy some bottles of that.