I have to admit my guilt of initial skepticism towards Rufus Opus' "Seven Spheres" from an ignorant armchair magician's perspective. The magical system seemed too "watered down" in comparison with the original framework laid out by Trithemius in "Drawing Spirits into Crystals" and other modern interpretations of it, like Frater Ashen Chassan's outstanding work.

My mind was changed by listening to the lovely Charm the Water podcast and following the reports of incredible synchronicites and life-changing events that unfolded around Aaron and Kelly's lives around each of the planetary initiation rituals. It has been on my bucket list ever since and a few weeks ago I finally managed to plunge into the first sphere.

How Aaron diverged from RO's original ritual order and timing resonated very much with me. The schedule in Seven Spheres seems quite tight and the order of planets to initiate into very strategic. Aaron approached it in a more organic way by following his intuition to tell him which planet to reach out to next and to let much more time pass after each ritual. It allowed him to fully experience each unfolding of planetary enchantment without hurry.

I knew that I wanted to initiate into the sphere of Jupiter first, because he rules my sun sign (Pisces) and I wanted to do it around my birthday at the end of March. I elected April 4 for the ritual, a Thursday, in the evening hour of Jupiter. The space weather seemed auspicious: the Sun and Moon were in Pisces, Jupiter himself at home in Sagittarius, and visited in his sign also by grumpy old wizard Saturn.

Allowing myself some artistic freedom constructing the required Trithemian table of practice, I followed Ashen Chassan's lead (backed up by Peterson and Stratton-Kent) and used the names of the Four Kings instead of the Archangels. Instead of the Gothic Latin names of the planetary angels RO uses and Chassan's classic Hebrew version which both are quite difficult to draw due to the calligraphic serifs I followed the layout by Polyphanes and used the Celestial Hebrew typeface popularized by Agrippa. Here is the final design I went with: 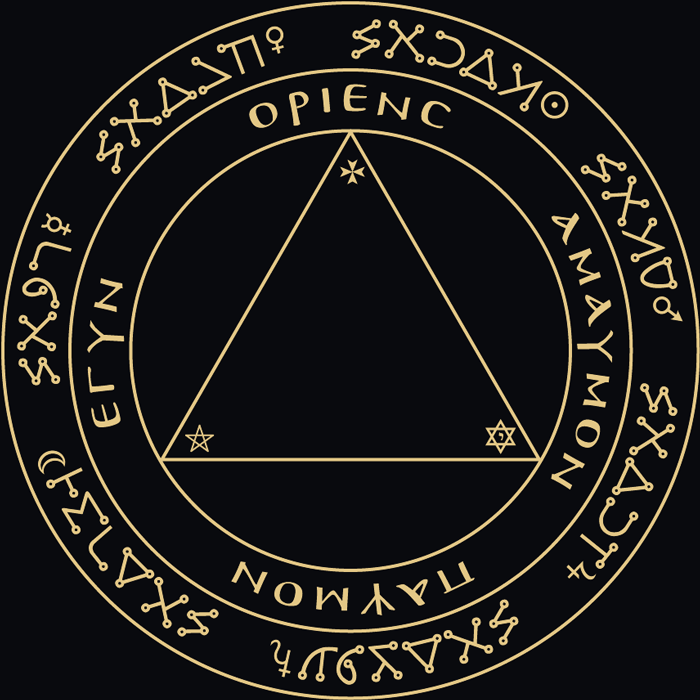 I painted it onto a wooden plate using black permanent marker and some minor decorations in gold and silver. The crystal is a scrying glass sphere I bought in my local New Age shop together with two royal blue candles, corresponding with Jupiter. For the required lamen and seals I used cardboard in the same color. Following Chassan I placed the altar towards Southwest and I intuitively turned the table of practice so the Four Kings would point into their respective cardinal directions. As suffumigation I went with a delicious combination of aloe- and cedar-wood. I quit smoking three years ago so I skipped the cigar smoke offering part, but I adorned the altar with some dried laurel leaves from the kitchen and an olive branch I had taken from a small tree that was next to the altar of Bona Dea Heia Augusta that I found during an obsessive quest in Croatia last summer. The alcohol offering of choice was a glass of my favorite Scotch Whisky Glenmorangie and as music I first played "Ode to Joy" and then a compilation of loungy Austrian jazz that seemed appropriate. 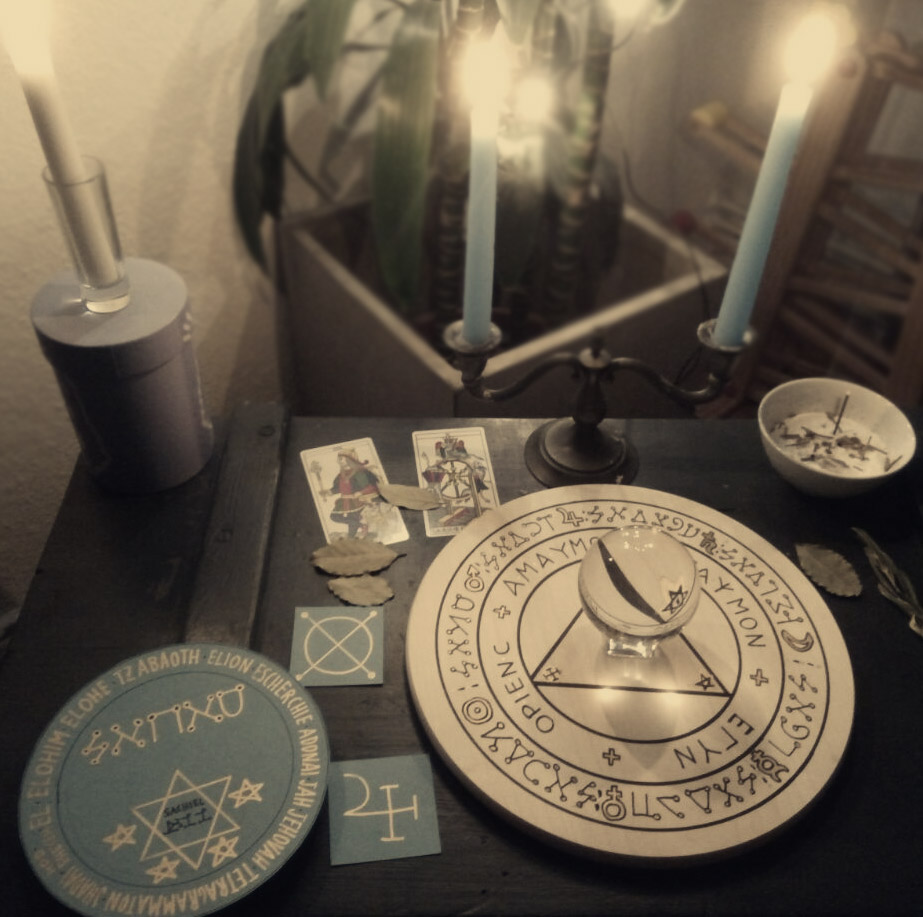 My preferred ritual language is German, so I had to translate the prayers from English first. You can find the translations here.

Despite neither seeing anything appear in the crystal, nor feeling any Angelic presence, I followed through with the whole ritual, confident that it would take some time for the effects of the initiation to unfold in the next days and weeks - and boy, did they unfold...read on