This article introduces a series of articles about my own default methods of magic based on spells and ritual outlines found in Graeco-Egyptian and Coptic magical papyri. I carefully attempt a recreation of a generic framework to apply to various magical operations for fun, efficacy and doing the Great Work.

Throughout the last years I have dipped my toes into different systems of ceremonial magic in search for some tried and tested protocol I could use for getting myself into the right headspace for the Great Work, as well as to boost my practical enchantments for better results. I tried very casual formulas for simple sigil magic or divination, boiled down grimoire protocols (e.g. Seven Spheres). I experienced failures with ceremonial frameworks which I half-assed because of the lack of tools (Harleianus MS 5596 / Hygromanteia) and found ones that I didn't even attempt to try because of the same reason (Key of Solomon derivatives).

Most of the post-medieval grimoire systems feel too elaborate for the magic I am doing, which is mainly sigil-work, divination, uncrossing-, way-opening- or binding-spells, ancestor-work and such. Due to safety concerns and the lack of tools and time I am not interested in working with Goetic entities or bullying spirits into physical manifestation. I am quite allergic against overly structured Victorian lodge magic like the Golden Dawn systems or their Thelemic spin-offs because of their fetish of shoe-horning everything into never-ending tables of correspondences. I totally acknowledge their importance in "Western Magic" - it just ain't my cup of tea.

On the other hand some of the more casual systems (Seven Spheres, various chaos magic frameworks) did not seem to get me into a satisfying headspace that made me feel sufficiently sorcerous. I guess I am less of a "technical magician" and more in search of a general ritual experiences that bristles with sparks of mysticism and weirdness. The only flavor of Western Magic that has been able to consistently fulfill this craving for me while also delivering satisfying results is the "Helleno-Kemetic" (or "Graeco-Egyptian" for a more Roman imperialist term) approach preserved in the papyrus collection often referred to as the "Anastasi Handbooks", "Thebes Cache" or more popularly "Papyri Graeco Magicae" (PGM).

I very much resonate with mashing up hoi polloi "folk magic" and unemployed temple priest thaumaturgy from the dusty back-alleys of Thebes with an unabashed syncretism of various branches of Pagan, Jewish, and Christian esoteric systems that even makes post-modern Chaos Magic look orthodox and I very much like the mind-bending use of barbarous names and vowel chants that was en vogue back then.

The body of work that documents this flavor of magic is a mess of torn papyrus scrolls written in Greek, Demotic, and Coptic found in a hidden cache in Thebes. On the majority of papyri unfortunately there is no detailed information about the requirements and protocols of the ritual framework the mages used to make their spells work - besides occasional footnotes to "do the usual". On the upside, this style of magic seems to not have required complicated tools - not even a circle. I like! But then there are of course animal sacrifices... 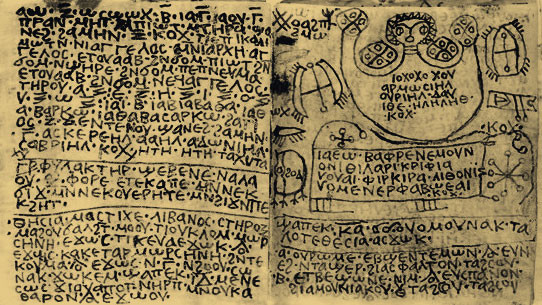 In the last decades several attempts have been made to reconstruct working ritual frameworks for Helleno-Kemetic magic. Noteworthy books on the topic are Stephen E. Flowers' "Hermetic Magic" and Tony Mierzwicki's "Graeco Egyptian Magick", as well as "The Book of Abrasax" by Michael Cecchetelli. Flowers' book is great for learning more about the cosmology behind the magic (at least as assumed by the author) and it has an extensive praxis part which is mainly a collection of PGM spells thrown together as if they were a grimore. Cecchetelli did a much better job at curating and modifying useful spells from the Anastasi Handbooks. Mierzwicki's book is a ritual framework for self-initiation into the planetary spheres based on prayers found in the PGM but with extensive commentary. Another work mentioning - although lacking praxis, containing some wild assumptions and focusing more on the Anastasi Handbooks' content, history and their place in the timeline of Western Magic is Stephen Skinner's "Techniques of Graeco-Egyptian Magic". A great new book that I haven't finished reading yet but is the most scholarly satisfying one for cultural context and an overview of techniques of Helleno-Kemetic magic is "Drawing Down the Moon" by Radcliffe G. G. Edmonds III.

The in my opinion best attempt of re-creating a practical Helleno-Kemetic ritual framework I came across has been brought to us by the great Polyphanes aka. Sam Block, who published it for free on his blog Digital Ambler with the usual galore of commentary.

While all of these works are helpful and worth checking out, it bothers me a bit that most authors seem to suppose the existence of ritual frameworks in Ptolemaic and Roman Egypt akin to post-medieval grimoire or quote-unquote "Hermetic" frameworks, like in Golden Dawn magic. What I mean by that is an elaborate protocol of ritual attire and tools, a circle of the art, delineation of temple space, opening and closing formulae, consecration of implement, banishing, invocation and evocation, and so on. There is no doubt that all of these have important functions in established Western systems of magic and I also understand that initiated or learned magicians default to looking for such methods because they work in the systems they have studied and mastered - yet to my knowledge there is no evidence in the source material or historic record that really justifes a need of retrofitting such protocols into the syncretic Helleno-Kemetic-Roman era forms of magic.

Having no affiliation with any magical order and not having followed any established magical path or school, I did not have a default ritual structure to work with when approaching the glorious mess of the Greek Magical Papyri. I jumped right in and did many experiments in which either nothing happened or my mind got fucked and I ended up physically destroyed and sick in bed.

Trial and error that was more painful than expected in my experimental naivety. In retrospect it was a mistake and a blessing at the same time. On one hand I could have avoided getting hurt by forces I did not comprehend, but on the other hand I learned important lessons in the most natural way I have taught my stubborn self almost everything else in my life so far: by experience of making mistakes and trying to avoid them in the future. Step by step, I find myself building a ritual framework from scratch that works for me for most operations.

I was asked a few times to share what I actually do, so I decided to write a few articles about it which I will publish here in the next weeks.

I tried to divide and structure the content into five topics, that - from my own experience - are absolutely crucial for Helleno-Kemetic magic, at least from my own personal viewpoint at the time of publication. I gave them catchy Greek titles, because why not? Not all of the listed parts are needed for every operation, but help staying safe and getting predictable results. This article is the introduction to a series of upcoming posts where I will outline each topic in detail, share techniques and spells with commentary and provide plenty of quotes from sources I base my assumptions on. Since all of my practical magic is and will always be work-in-progress the contents will change and be updated regularly. Here is the list of topics that will also serve as a Table of Content once the articles will be released.