For my research about the headless one that got way beyond my initial goal of simply translating the text for personal praxis I stumbled upon a publication by Karl Preisendanz, the first translator of the PGM into German in the 1920s, called "Akephalos - The Headless God" The book is a monograph Preisendanz published as a reaction to several publications by other researchers who had misinterpreted the identity of the headless one in his opinion. It is a very interesting book that cleared up a lot of questions and confusions for me and in my opinion has very concise lines of arguments that convinced me more than similar ones by other authors who wrote about the same topic.

It seems to me that there is no English translation of this book, so here is a brief summary of the contents, in case you are interested.

In the preface Preisendanz explains that he had read the work "Akephalos Theos" by A. Delatte and felt the need to publish a paper in order to point out errors and misconceptions in Delatte's work, although he found this work very helpful and inspiring for his own research. Additionally he wanted to argue against R. Wünsch's idea of following Delatte's conclusion of a Seth-Typhonian character of the headless one.

In the first chapter Preisendanz gives a general overview of headlessness in folk magic and mythology around the world. He talks about decapitated ghosts in Germanic lore, the headless Molos and Triton in Greek folklore, general lore of veneration of heads of gods and martyrs, the stoic round god of Varro, the Thracian and Phrygian god Korybas, the Pepelekismenoi of Kypros, headless ghosts of decapitated criminals, animal ghosts without head, some history of separate head burials in pagan Germanic cultures to prevent a return from the underworld, the black headless men on ships in Byzantium, the burning of fallen travelling warriors in Italy and separate burial of their heads for mere practicality, the dismemberment of corpses in ancient Egypt with subsequent reassembly and embalment related to the Osiris cult, the legend of the papyrus head ship from Egypt to Byblos, the importance of headless godliness in Egypt in general.

Preisendanz continues with a rant against Delatte's connection of the headless demon Phonos from the Testament of Solomon with the Graeco-Egyptian god Seth-Typhon and arguments that already the description in the Testament of Solomon states that Phonos has his face on his chest, thus he is "stethokephal" and not "akephal" while the real headless one has no mouth or eyes but looks like a decapitated man.

(Egyptian drawing of the headless one holding a sun disk)

In "The Headless God on Gems" Preisendanz again rants against Delatte's interpretation of gem no. 615 of the numismatic museum of Athens which shows a human figure with the head of a horse or donkey in which Delatte saw the solar god Seth-Typhon and a about Delatte's interpretation of a second Athenian gem of the Roskowitz collection that shows a similar but decapitated figure and an ourobos where D. had claimed that it depicted an act of self-decapitation. Preisendanz doubts these interpretations and concludes that it was probably a depiction of the jackal headed Anubis and the beheaded Osiris like on the gnostic gem of C.W. King that Delatte had correctly pointed out.

What follows is a chapter about Seth in the PGM. Here Preisendanz objects to the syncretism of Osiris, Horos, Apollon, Seth-Typhon and Bes by A. Delatte who sees them all as solar gods who could all be depicted as headless. He deconstructs every single claim by Delatte of Seth being a solar deity: Just because Seth had helped Ra with the removal of Apophis doesn't make him a solar deity. He goes through PGM IV 155-285 proving that there is no proof of Seth-Typhon being a solar god, but a powerful and dreadful spirit, despite ritual details about facing the sun. In PGM VII 961-970, Seth is conjured as a powerful creator god and fire demon, but that does not make him a solar deity either, the same goes for PGM XII 11, 15ff, PGM IV, VII 366.

"The Roman Curse Tablets" is a quite lengthy chapter where Preisendanz deconstructs the identifications of headless or donkey-headed figures with Typhon-Seth by his fellow researchers Richard Wünsch, M. Matters and others. I skipped over this chapter quite a lot, because it is quite boring when not knowing the works Preisendanz referred to.

Preisendanz points out inconsistencies in Wünsch's interpretations because sometimes he sees Osiris as "god of the waters" and on other occasions he connectes Seth to being a water deity. He condemns Wünsch's way too speculative interpretation of the beginning part of conjurations on the roman tablets that says "dee Phrygia, dee Nymphee, Aidonea" as merely misspellings of "dee Ephydrias, dee Nymphaios, Adonai". Apparently Wünsch created a god "Ephydrias", who sits on a water vessel whom he equates with Osiris and a god "Nymphaios", allegedly just another name of the former (god of the water nymphs and Adonai as the Jewish god syncretised with the Greek Aidoneus. WÜnsch describes Osiris as god of the water and the underworld. Preisendanz corrects that instead the names refer to a female demon "Phrygia" and "Nymphee" to be either the plural form of the female water nymphs or as is written in PGM IV 2614 the alias "Nymphê" of the goddess Hekate, which also explains the last name "Adoneia", another name for Hekate as of PGM IV 2564, 2855, 2726. So it's actually all about Hekate. Preisendanz goes on and on about other errors Wünsch apparently made, so I skipped to the end of the chapter where Preisendanz concludes that the Headless God can not definetly be identified within the Roman Curse Tablets, neither by Delatte, nor by Wünsch.

The next chapter, "The Headless God in the PGM", was obviously by far the most interesting one for me.

Preisendanz presents the "Stele of Jeu" text but without all the barbarous names. He explains the mixing of Graeco-Egyptian deities with Jewish elements and claims that the scribe "Jeu" was probably a jewish magician and added his own elements to Graeco-Egyptian magic tech.

Preisendanz states that the headless one is no other than Osiris. One evidence for this is that Osiris has been depicted as headless on a sarcophargus in Kairo. Delatte's claim that Seth is literally also part of the spell is wrong, because "Reibetatheleberseth" is one word, so just taking "seth" out of context is simply false. He acknowledges that "awesome and invisible god" is usually a term for Typhon, but argues that description could also be used for other deities. 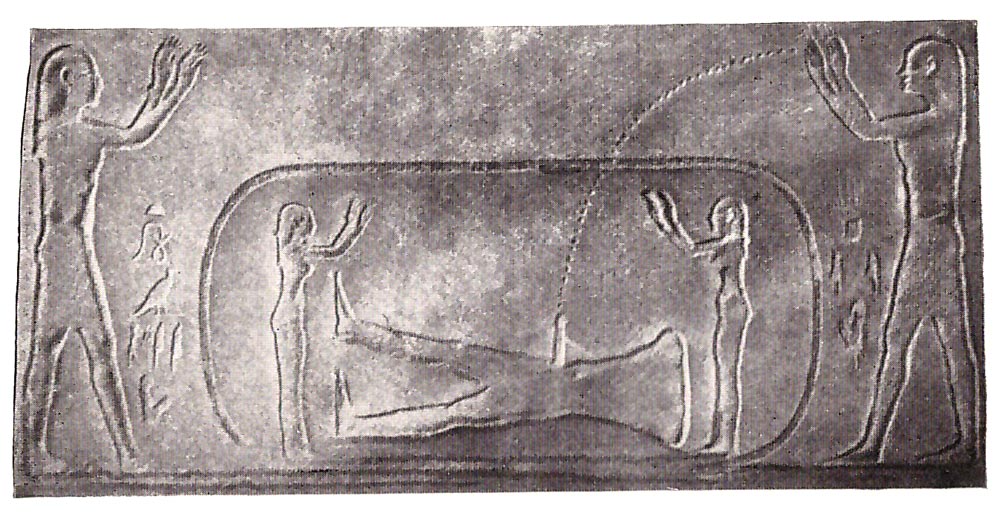 (The headless Osiris on a Sarcophargus in Cairo, guarded by Nephtys and Isis)

Preisendanz criticizes the equalization of the headless god with Bes that Delatte concluded about PGM VII 222ff and PGM VIII 64ff. He argues that the former is probably a corrupted and fragmented version of a spell that was written down in a more detailed and correct version as the latter. In the latter version it is clearly Osiris who is being called as "the headless one." The other reason is the sketch that comes with PGM VIII of how to draw Bes. He is not depicted as headless and also not like he is usually depicted - as an ugly and hairy demon with a deformed face on his chest, but as a normal male figure wearing a crown and a sword. About the quite obvious connection of the "headless god, the face on his feet, etc." with Besas in PGM VIII 234, 244 P. argues that Besas in his classic depiction has his face on his chest, so he can't have his "face on his feet" at the same time. The rest of the conjuration also rather hints towards Osiris, the two birds next to the head representing Nephtys and Isis who took the form of two falcons. Preisendanz explains his interpretation of the term having the "face on his feet": Delatte's explanation of the serpent or jackal heads on the feet of some depictions of Bes is not sufficient. 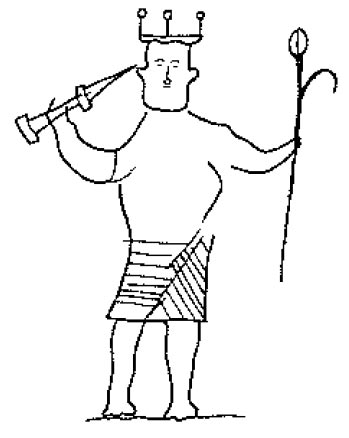 (Drawing of Bes in PGM VIII)

Preisendanz presents images of beheaded captives in Egypt who had their heads between their feet but admits that he could not find any image like that that clearly depicted Osiris. He explains the Egyptian custom of Akroteriasmos, the dismemberment of a body before embalment where the head is usually put between the feet to make it impossible for the dead to wake up and pick it up again. As Osiris is the prototype of the concept of a dead god, so he probably also has had his head between his feet. 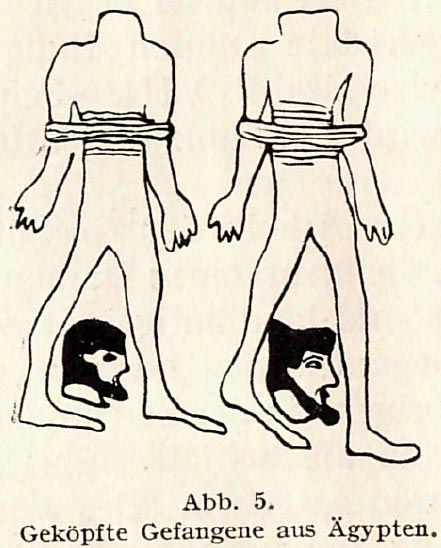 Preisendanz concludes about PGM VIII that instead of a syncreticism of Besas with the Headless One the real explanation is a simple magical practicality: Besas is correctly conjured as a protective spirit, partially by using the provided drawing, but in order to successfully conjure Besas there is a need for a higher authoritative spirit, so obviously Osiris is being called as the headless god, to kick Besas' ass. Preisendanz says Besas is a well known minor folk magic spirit and never depicted as headless, so the only possible identity of the headless one is Osiris.

He lists more evidence of Osiris as headless god, e.g. PGM XII 2, 1ff talks about a beheaded scarab, a symbol closely connected to Osiris, he also refers to the "Book of the Dead" and Budge's work "The Gods". Also the bas relief of Philae apparently shows a beheaded Osiris

In his chapter "The Headless God of the Berlin Papyrus" P. explains in great detail what PGM II is about, that some text seems to be missing and that it is a hymn to a syncretised Helios-Apollon, and that the magic image is a headless deity but it is not 100% clear who. The magic words "Damnameneus" and "Semesilam" hint towards a solar god, also the planetary vowels are usually used in a solar context. The scarab image described in the text and shown as a drawing hints towards that conclusion too.

What follows is a short chapter about two images of the Oslo papyrus where P. explains two headless depictions, of which one could be interpreted as Osiris, but the "questionable artist" drew the image so badly that it's too difficult to clearly interpret. 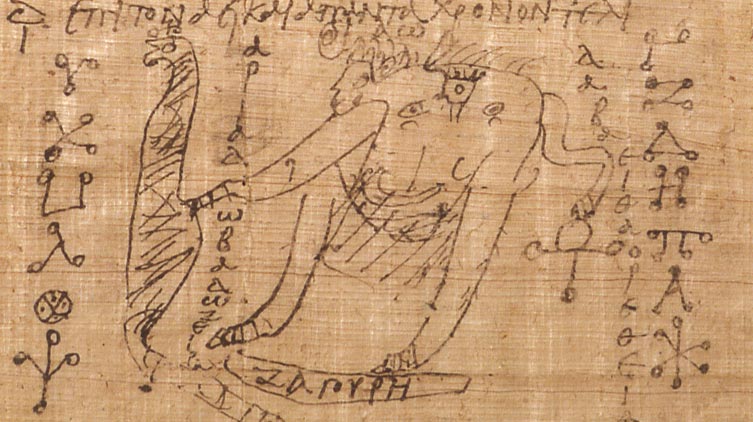 (one of the headless ones from the Oslo P.)

A very interesting chapter is "Akephalos in the Sky". Here P. describes that on the Dendera Zodiac some of the decan depictions show headless figures. He talks about every single one of them and that it is unfortunately unclear who is being depicted. He regrets that it cannot be proven but that it would be a beautiful connection between the headless one in the decans and the PGM. He refers to the book "Sphaera" by Franz Boll who talks about the decans in detail and that K. Dieterich even connected the drawings of PGM II with zodiac signs in one of his works.

In the last chapter Preisendanz lists examples of talismans showing Osiris as headless one or scarab headed one.